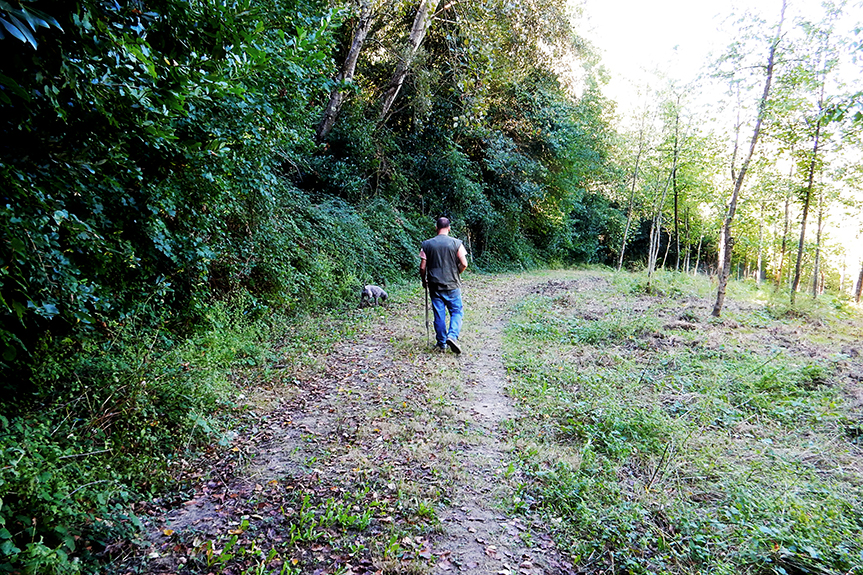 It was a perfect day in Florence as Michelle and I headed out  into the Tuscan countryside, for truffle hunting,  and wine tasting .  Hilary, our vivacious guide and  sommelier extraordinaire, drove us in true Italian style, racing through the busy streets of the city, dodging scooters and tourists, and up the winding hills into the beautiful countryside. Lush green hills interlaced with vineyards, forests and olive groves sped past us as we made our way to San Miniato, a hillside village in the Arno Valley where we were to start our truffle hunting experience. 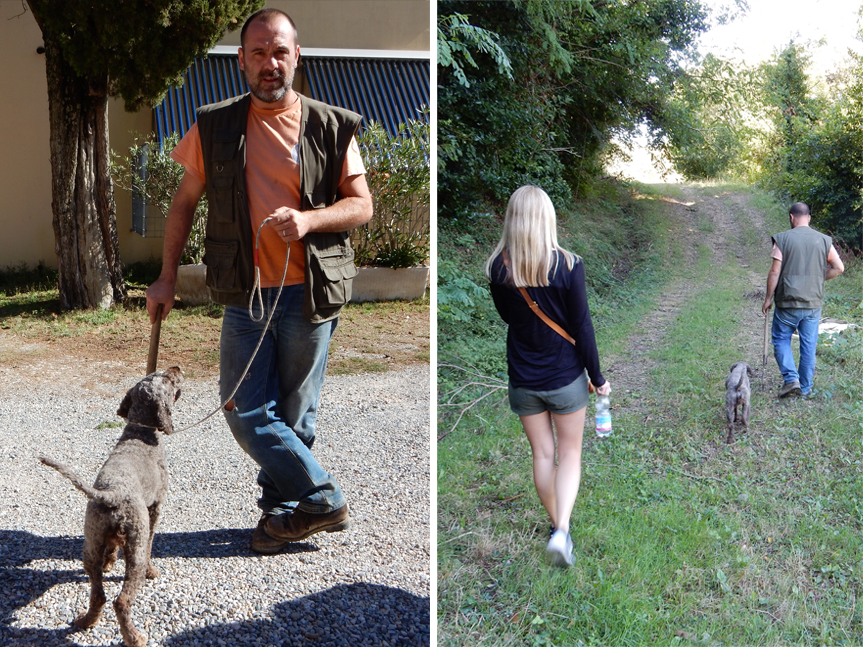 I love the idea of foraging, so the whole truffle hunting idea really appealed to me.  Truffles are outrageously expensive and sought after and as we discovered, not that easy to unearth.  As our truffle hunters (trifolau) and their trusty dog Choco led us out into the forest they explained that truffles grow in the same places year after year, but quite honestly to me it looked like we were trying to find a needle in a haystack. The trifolau are very secretive about their finds and each truffle is recorded in a book with the place, day and year so that they can return the following season to find more. Once the dog has smelt out a possible find, the trifolau, uses a very old and narrow spade to dig around the truffle so as not to damage it, and then replaces the earth.  A little gem secretly plucked from the ground and nature restored as it should be.   Harvested in this time honoured tradition, I could understand the reason for its price, and why it is considered the ultimate gourmet ingredient.

A truffle is a species of fungus that grows entirely underground. It grows only in certain soils and amongst the roots of specific trees like oak, beech and poplar.  The large ones are found in dense soil, whilst the smaller ones, which Choco unearthed, are found in the loose soil above.

We headed back to the Villa for our meal and wine pairing.   White truffles are best consumed as soon as possible after they have been found as they do not keep for long.  They are eaten raw by slicing them finely over food, whereas the black truffle needs to be sauteed to bring out the best flavour. We started our lunch  with bruschetta and  proscuitto followed by Italian Cabbage and Bread soup, served in a ramekin, which interestingly we ate with a fork. 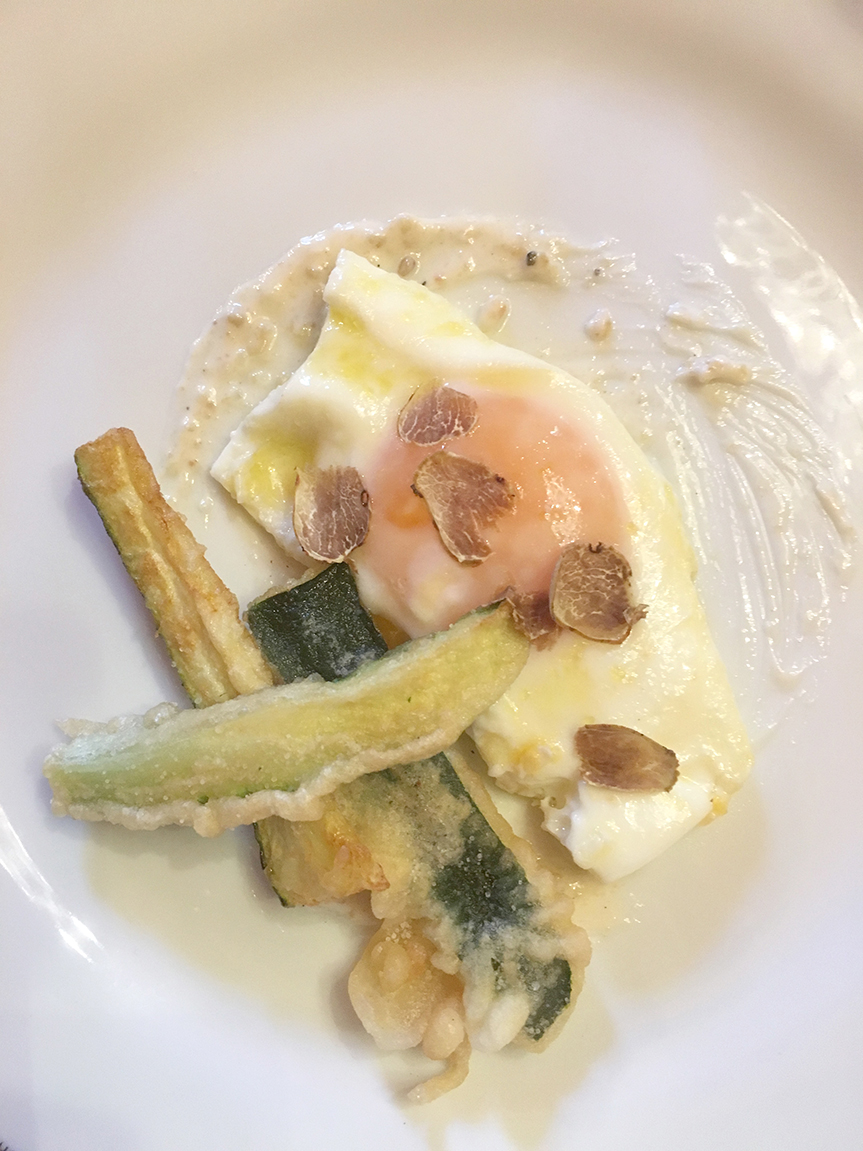 This was followed by a mouthwatering tagliolini al tartufo, al dente tagliolini cooked with black truffles and tossed in a white truffle cream, and complemented by Italian wine. After that we were served a fried egg with tempura zucchini strips, truffle cream and shaved white truffles .  Although I couldn’t work out why we were served  fried eggs after our pasta, it seems that this is quite a common practice.  Lastly we ended with biscotti and sweet dessert wine produced on the farm.

Our next destination was an organic farm near Florence for more wine tasting and a tour of the cellars. Here they raise Cinta Senese, a breed of  pig that is black with a white stripe, and Chianina cows which are white, among the largest cattle in the world, and the meat is of exceptional quality.  There are laws governing farmers who raise this breed of cattle which must be reared in the wild, leaving the cows on the pastures for the summer period and keeping them inside and fed with hay during the winter months. 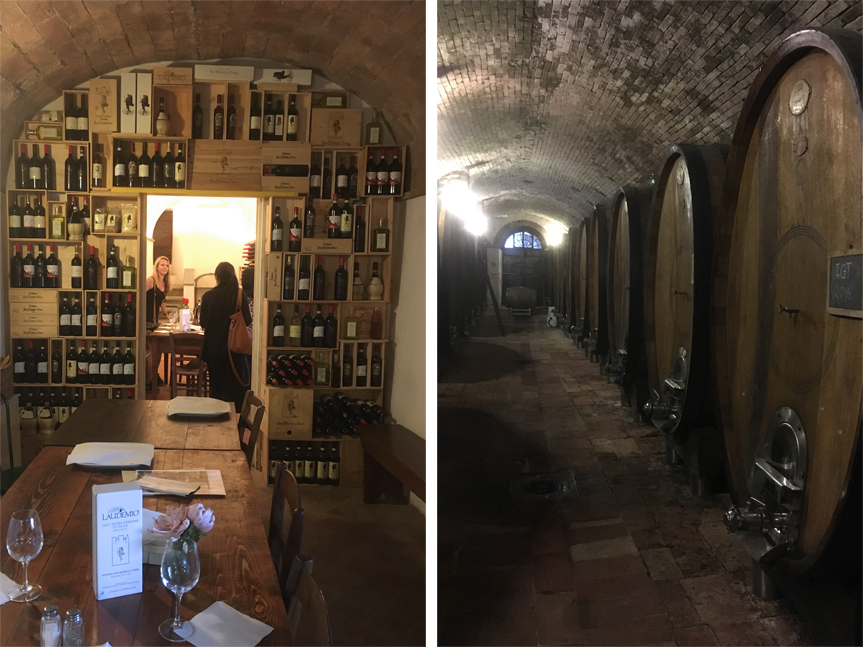 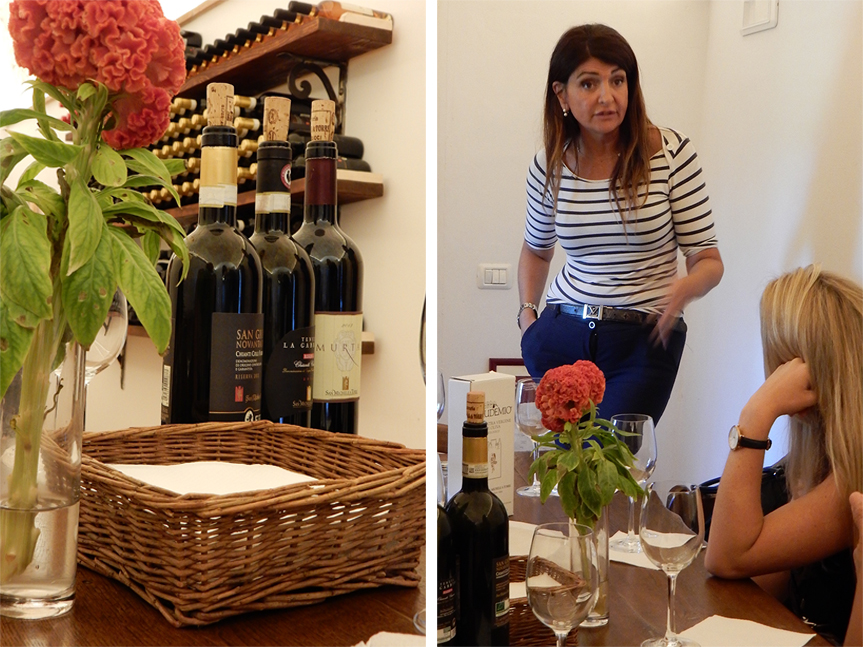 All that remained was for us to head back to Florence to have the customary and famous Buontalenti Gelato. 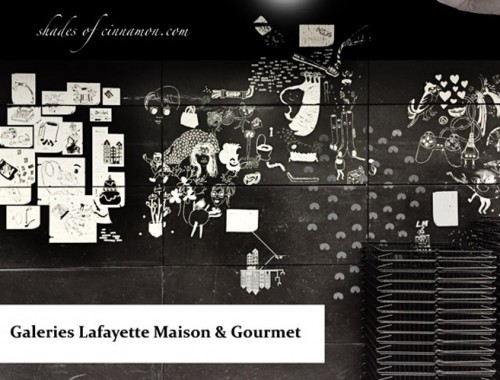 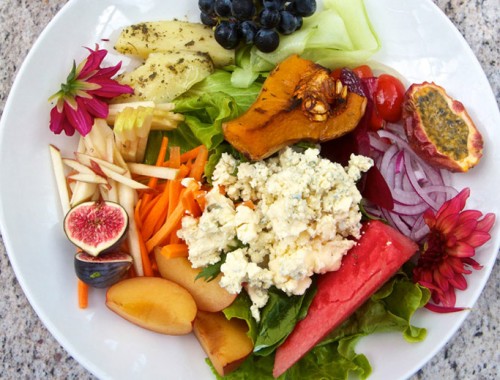 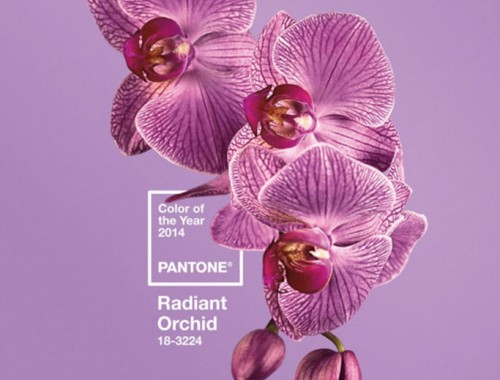 Leave a Reply to Shades of Cinnamon Cancel Reply